Did you watch Wrestling when it was "Real"?

StarSong said:
If you're saying that WWE type TV and arena wrestling isn't highly choreographed and staged, I must strongly disagree especially because I knew someone who participated in it and gave me the inside scoop.

Sure, WWE requires great strength and skills, but a lot of what the audience thinks it's seeing isn't for real, just as movie & TV fistfights aren't what they seem. There are a lot of talent stunted actors in WWE.

Humans can't be bashed in the head with metal folding chairs and bounce back up in less than ten seconds, never mind compose complete sentences after undergoing that kind of punishment week after week. Just as in Wild West movie fights someone would get hit over the head with a whiskey bottle and not only get back up, but accurately shoot someone with his pistol. Wouldn't go down that way in real life.

Olympic type wrestling is another matter altogether.
Click to expand...

Those who think wrestling was fake learn their lesson the hard way:

Awkward is my Superpower

Whatevs... I don't care enough about the subject to further argue the point.

My girls loved going to the matches when they were young. Their dad after the divorce would take them. I did not have the heart to tell them it was fake. They had their favorite guys and it was something they could do with their dad.

Me & son's favorite--Ultimate Warrior. He was so much fun we didn't care about reality! 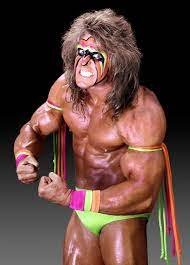