On 8/6/1945, the plane named Enola Gay and flown by Paul Tibbets flew over Hiroshima looking for their predetermined target just as kids were beginning classes. The air raid sirens went off and the kids got under their desks, like that was going to help them from what was about to happen. A few minutes later, the all clear blast was given and the kids took their seats. A few minutes later, another air raid was sounded and this time the bomb doors were opened on the plane and the plane's payload was released. 43 seconds later, a bright flash of light appeared and instantly 80,000 people were vaporized. A mushroom cloud appeared and then dropped its radioactive particles over the city of Hiroshima as the cloud descended over the city. We think this will never happen again.

It's bound to happen again. Give kids a weapon and they will find a way to use it and, sadly, simple-minded kids are what so many countries have leading them. Too many madmen want war, not peace.

We can only hope it never happens again, but I doubt that hoping will not make it so. I hear young people today react to certain news items, saying, "Nuke 'em." They haven't a clue as to what they wish for.

Lavinia said:
It's bound to happen again.
Click to expand...

Sadly you are probably right...
D

In seventh grade I did a book report on the book titled "Hiroshima". The class was enthralled by the details I shared from the book. I think every person should read this book, especially our "leaders" to understand the gruesome reality of that kind of decision. It has remained a vivid picture in my mind since that age. One that can never be forgotten. There were no picture in the book, but so well written none were needed.

Been There said:
43 seconds later, a bright flash of light appeared and instantly 80,000 people were vaporized.
Click to expand...

The next nuclear exchange will likely take at least 200 times that many lives.
B

When I was in college, I wrote my thesis on weaponry used in today's military back in 1984. The internet had not yet become anything near what it is today, but there was some helpful information that I could use, along with the scores of other knowledge that I obtained from other sources, including the Encyclopedia Britannica. I also wrote to different physicists, which only a few returned answers to my questions, personal interviews with Generals and Admirals and being that I was a student at the Naval Academy, I did have some luck in getting a 15 minute interview with the Joint Chief of Staff, General John Vessey, Jr. We met inside the Pentagon.

When I included the atomic bomb and different nuclear weapons in my thesis, I faced a stumbling block because back then, so much of the information was listed as classified and was not available to the public. It was really a very difficult job getting good information from those people in the know. I really enjoyed writing about these types of weapons, especially the A-Bomb. It really peaked my interest, being that it happened way back in 1945 when nuclear weapons were only thought of seriously in comic books, but then became reality. I mostly interested in the A-bomb. mainly because it had been used in a war and there was more information available about the bomb.

The main question that I never received a straight forward answer to was, "Why did President Truman decide to drop the A-Bomb?" In my opinion, I had received three more probable and credible answers. One was that Truman was in a hurry to end the war. Second answer was that Truman thought by dropping the bombs and ending the war would save American lives on the seas and the battlefield and the third answer was by dropping the bombs, Truman felt it would make the U.S. look like the military giant of the world and that no other country would attempt to go to war with the U.S. He hated the idea of continuing to bomb Japanese owned islands and even trying to invade Japan by storming the beaches.

I did receive other lesser credible answers. I thought some of the answers were more like an opinion. Here are a few. By dropping the bombs, it would save both U.S. military lives as well as Japanese lives. How could that be? The bomb dropped in Hiroshima killed at least 80,000 just after impact. Over 100,000 Japanese lives were lost between the two bombs that were dropped. Truman wasn't concerned about saving Japanese lives. Another answer received was that by dropping the bombs, the U.S. would be the country where every industry would want to set up shop and be a lifetime partner due to our military strength. That initially did happen for several years before Japan and then China became more industrialized than the U.S.

Here is a very good link provided by the Britannica that explains how the A-Bomb became a game changer un WWII. 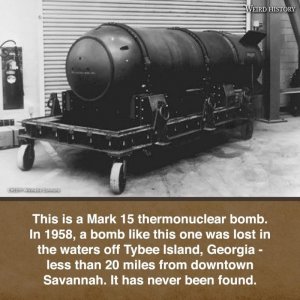 Well, the dropping of the two bombs was retaliation for the Pearl Harbor attack , which took some 2400 American lives ..... many of which were innocent civilians . The two bombs were thought to be the best way to end an already very costly/bloody war. And it was estimated to have saved over two million additional lives. If it does any good to hope ? ...... I hope neither ever happens again.

However, if we are ever attacked again , by anyone ..... I hope we have two more bombs on the shelf. 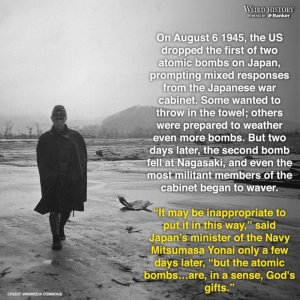 Brightline: The Deadliest Train In America 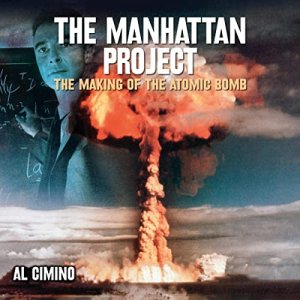 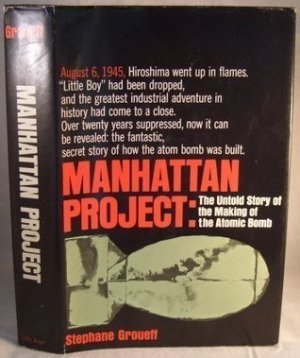 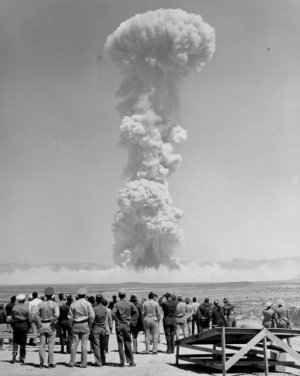 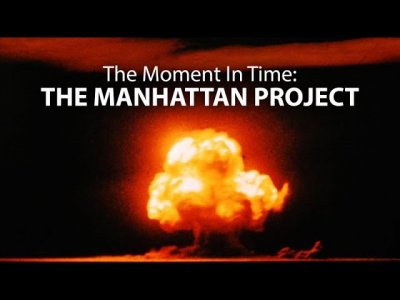 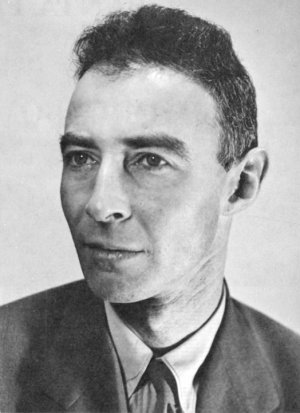 Robert Oppenheimer was a genius. If we only had him with us today.
Thanks for posting your collage if informative sites to visit.

rgp said:
Well, the dropping of the two bombs was retaliation for the Pearl Harbor attack , which took some 2400 American lives .....
Click to expand...

I think it was also in part a reaction to the Kamikaze attacks and other evidence that the Japanese were not going to give up without some really shocking event.

Brightline: The Deadliest Train In America

Moon Rat said:
Robert Oppenheimer was a genius. If we only had him with us today.
Thanks for posting your collage if informative sites to visit.
Click to expand...

Fer sure. He would surely cook up the ultimate nuclear bomb that would make the Tsar Bomba look like a firecracker. 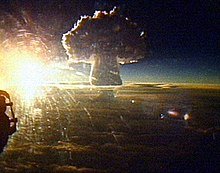 At the time American's were becoming "war weary". I listened to a podcast the other day and it talked about the first time in the war the Navy released rather graphic newsreels. They showed the horrific conditions going on in Okinawa. Many people think that it was a measure to prepare the people for what may come should the US have to invade Japan. Things would have been much worse as the people of Japan were prepared to die to defend their country. Japan was prepared to surrender but with conditions that were out of the equation such as keeping territory in China and surrounding islands.

Obviously the effects of both bombs were horrific but so were the firebombing raids on Tokyo. I know that many question the dropping of those bombs today but it was a different world back then. It was not an easy decision for Truman either. From what I have heard, he had only met with Roosevelt a couple of times before his death and the research on the bombs were never mentioned to him. He only found out once he became President. I do think he decided to drop them because unconditional surrender was the only option the Allies would accept and with America become fatigued with the war this was the quickest option to end the war. It can be an ongoing debate until the end of time but I personally do think it saved not only American lives but the lives of civilians living in Japan. That does not make it any less tragic though and the after effects are still felt to this day.

I've been wondering if we're headed in that direction now!

MarkinPhx said:
I personally do think it saved not only American lives but the lives of civilians living in Japan
Click to expand...

That may well be true... just speculation now, but certainly possible.

OneEyedDiva said:
I've been wondering if we're headed in that direction now!
Click to expand...

I sure hope not, but I fear its possible, and long-term maybe likely. My crystal ball says its not so much China or Russia we should worry about its a smaller rouge state, or even a terrorist group that gets access to a bomb. There are lots and lots of the damned things out there... 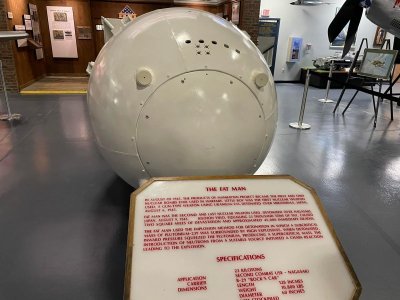 I have two nephews who graduated from Richland High School. I think they should reconsider their mascot... 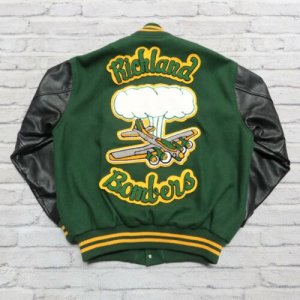 Alligatorob said:
That may well be true... just speculation now, but certainly possible.

I sure hope not, but I fear its possible, and long-term maybe likely. My crystal ball says its not so much China or Russia we should worry about its a smaller rouge state, or even a terrorist group that gets access to a bomb. There are lots and lots of the damned things out there...
Click to expand...

I wouldn’t worry so much about North Korea as I would Iran. Iran has hated the U.S. since the Carter days. The Ayatollah Khomeini was a real thorn in our side. He wanted to destroy the U.S. and tried to talk Libya into being an ally in that effort. He was an old school ruler that ran the country with an iron fist and was able to control the minds of his countrymen. When and if they develop their nuclear weapons, we will need to be very vigilant because they have often threatened to nuke us as their first target.