I've done this for quite a few years, but now that I have gotten older (I'll turn 67 on Weds) and have high blood pressure, which is under control with meds, and back and shoulder pain issues, my wife doesn't like me going out, especially alone which I did all the time until the last couple of years. Fishing from a float tube is just so much fun. Good exercise too, kicking around with swim fins on my feet. I do have a floatation vest that is required, but in the summer I just tie it to my 'tube. In the cooler months I'll wear it along with neoprene chest high waders which help keep you a bit warm from the cold water. But since this is Southern California, the lake only gets down to about 55 degrees or so. Does anyone else out there go float tubing? 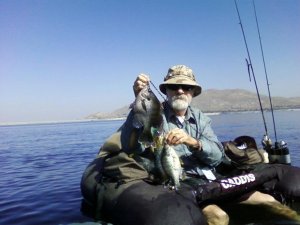 Great picture Fishmounter! I've done a lot of fishing since I was a little girl, but never in a belly boat. I have seen a lot of people in them though on lakes and it looks like a lot of fun! It's nice to have a wife who worries about you, I wouldn't want my husband going out alone either in one of those. Have to be a bit more careful now in our later years, older and wiser.

I fished out of a float tube for many, many years locally like the one pictured below.

To avoid losing space in my suitcase twice I pre-shipped my tube (Fishmaster brand) and kickers up to Northern Manitoba to fish for Northern Pike......never having a customer do it before the lodge owners thought I was nuts.

I really had a ball getting drug around when the big ones were hooked.

It was really a lot of fun but even with waders, jeans and long johns my legs still got pretty darn cold but then after a bit they sorta went numb and then it wasn't so bad. 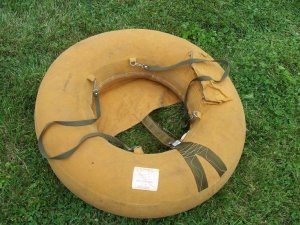 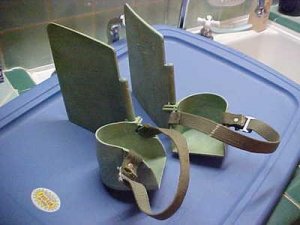 HTML:
For some reason, they've never caught on in Florida. I guess having a 12' gator taking a liking to your leg as a nice afternoon snack turns some people off.
F

jujube- Yeah we have guys that like to take their high-end fancy float tubes out here into the nearby ocean to fish for the tasty halibut and other shallow water fish. The only thing is.. Southern California is where lots of baby Great White Sharks are. They feed on the abundant stingrays and other fish. These are just 6 to 8 foot youngsters and they are not interested in eating humans, but there have been people bitten by scared hooked sharks and also when the water gets cloudy or murky and they mistake a diver's fin for a fish. Once in a while a large adult GWS is spotted as they swim by and these very large sharks have been known to attack surfers and kayakers because from below they look like their main food, seals and sea lions. I'm not sure which is worse, alligators or sharks!? I don't go float tubing in the safe local bays because I just don't want to get all my gear in the corrosive salt water, and I don't like fighting the strong tides and currents.
You must log in or register to reply here.