Was it really an accident, or murder?

All the details are in this link to the Daily Mail Story of 21st December 2019.

Holy smokes, Mike, sure does make one think, doesn't it? Wow.

Bill O'Reilly's "Killing Patton" was an interesting take on his death. Even in the film George C. Scott said something to the effect, "We have to quit being soldiers and start becoming diplomats". At the end of the war the nearly impossible tasks of rebuilding the world had no place for the undisciplined likes of Patton. Patton became a warrior trapped in peace time. I don't believe we will ever know the who and whys of his death but love him or hate him he scared the s--t out of the Nazis. I think it may be time to reread the book. RIP

From the day this happened it was thought that this was no accident at all. Patton could have publicly shamed how inept Eisenhower was as Allied Commander and rightfully so. Ike had never led any battlefield incursions in his entire life and never understood strategy like Patton. George could have really derailed Ike's road to the presidency.

The "General George Patton Museum of Leadership" in Fort Knox, Kentucky is awesome... 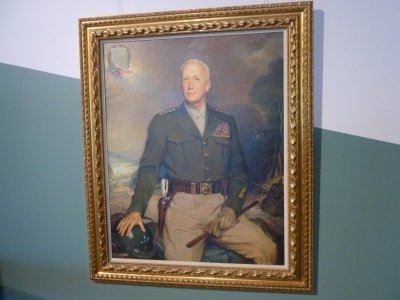 @Mike, the article at the link was most interesting. Thanks for the excellent read.
R

My dad, who served under Patton during WWII , also served additional time during the European occupation . During that time, he stated that "things" were allot more laid back, and and not so secret . He went on to say that opinion was it was no accident ??

He also said that the real danger to Patton's life came once he entered the hospital.