When we visited Norfolk Island, its beauty was unsurpassed. Captain Bligh and Fletcher Christian intrigue was foremost in my mind. To discover the shocking cruelty of the British penal system towards the convicts was a wake-up call I’ll never forget. 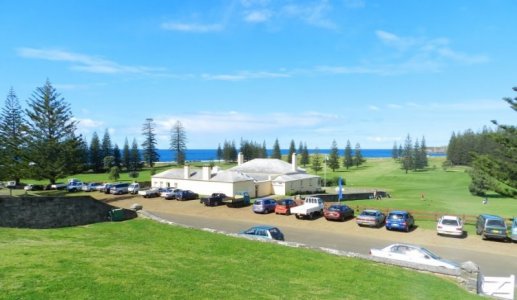 Only a couple of days ago I watched episode one of a TV programme from 2016 - somehow missed it first time round - called Islands of Australia with Martin Clunes. One of the first islands he visited was Norfolk Island and yes, the treatment of the convicts was horrendous.

The first settlement at Norfolk was rather benign. The plan was to grow food and harvest the tall trees to use as masts. The men chosen were not hardened criminals and discipline was not too severe.

The ship that took them there sank on a reef and the food growing enterprise failed. The timber proved to be too weak for masts. They nearly starved because there was no way to send for help. They were saved by the arrival of migrating birds that used the island as a rookery - some sort of booby, I think. They had never encountered humans before and they just plopped down out of the sky and were scooped up and eaten. They were dubbed Providence Birds because they seemed like a gift from Heaven. They are now extinct on NI.

The first settlement was abandoned and later a second penal settlement was established and it was quite severe. It was for convicts who re-offended in the colonies.

It is fascinating to explore the graveyard. Just about every person buried there, including the convicts, has a tall headstone with details that include how they died. Quite a few drowned while attempting to escape by swimming.

Eventually the second settlement was also abandoned. The third settlement occurred when Queen Victoria gave the Pitcairn Islanders the right to establish a homeland. These people were the descendants of the Bounty mutineers and some native men and women of Tahiti.

We have to view the convict era in terms of the times. Life in the British Navy was also extremely harsh for the men. Imprisonment in the hulks on the Thames was no fun either. People sentenced to transportation to NSW could make a new life in much healthier surroundings. Many were given land grants to grow food for the colony. Their children thrived.