The peak of the best summertime meteor shower – the Perseids – will be coming to a sky near you Monday night, weather permitting.

Unfortunately, the moon is very close to full, which will wash out the fainter Perseids, NASA's meteor expert Bill Cooke told space.com. "The Perseids are rich in fireballs, so you'll still see Perseids; you just won't see the show you've seen on nights when the moon has not been around."
The moon's bright light will drown out fainter meteors and leave the brighter ones less impressive during the prime viewing hours after midnight, Astronomy magazine said.

Cooke said to expect to see from 10-15 meteors per hour.
The best Perseid performance we know of occurred in 1993, when the peak rate topped 300 meteors per hour, NASA said.

What's best about the Perseids is they can be enjoyed during summer's warmth, unlike the often nippy nights during the Leonids of November or Geminids of December.
This year, the best time to see the meteors could be later in the night, right before dawn, Sky and Telescope reported.

Aside from the moon, cloudy skies will obscure some of the show in the Northeast and Great Lakes, AccuWeather said. The best views will be across the western and south-central U.S., where clear skies are forecast.
The Perseid meteor shower occurs every year when the Earth passes through the cloud of debris left by Comet Swift-Tuttle. The meteors are actually tiny dust and particles from the tail of the comet as it orbits around the sun.

The particles, many no bigger than a grain of sand or a pea, blast across the sky at 132,000 mph and disintegrate high up in our atmosphere after making a brilliant flash of light. 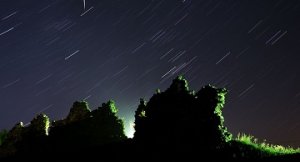