I also will be watching from Lee Elder, Jack Nicklaus and Gary Player on the Tee box,
all the way when the Green Jacket is Worn.

Both my parents and I were born in Augusta, so it has always been something we watched as a family.

I live across the river in Aiken, SC. While they think that there will be fewer people this time, I doubt that it will be that different. Our little airport will be packed tight with corporate jets, forget it if you don't already have restaurant reservations, the roads around the Masters will be very busy, and our high end jewelry stores across the street from the Masters will be raking in the $$ from bored wives who came along for the ride.

The azaleas in this area are beautiful this year. The scenery should be spectacular.

I am glad that I don't have any appointments in Augusta during this timeframe.

I am not a big golf fan, but I do enjoy watching the final round.

For me, The Masters is just an excuse to enjoy a pimento cheese sandwich!

Be sure to try a pimento grilled cheese version. 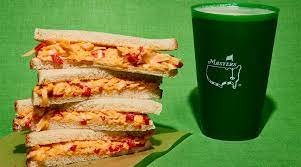 Aunt Bea said:
For me, The Masters is just an excuse to enjoy a pimento cheese sandwich!

Be sure to try a pimento grilled cheese version.

We ate a lot Pimento Cheese sandwiches growing up! Haven't had one in years.
My Mom added something extra, can't remember, will have to call my brothers.
Might be 'Dukes'...

I'm not a golf fan but one thing struck me when I read the title and that's the number of big sports events that you only say "The" and another one or two words and almost everyone who's interested in sport knows which event you're talking about. The Open - UK equivalent of The Masters, Wimbledon for tennis and in the soccer world The Cup Final is the final of the English soccer tournament. Any others you can think of?
Last edited: Apr 8, 2021

I'll be watching on Sunday for sure, maybe Saturday.

Great and it's on time this year unlike last.

I haven't watched the Masters since the last time Jack Nicklaus won.

I do have some found memories of golf from when I was in my late teens. A pal of mine knew about a golf course, about 5 miles from where he lived, he said we could play for free. I came to find out, the course was actually a future private country club that wasn’t built, it wasn't even under construction yet, but the actual course was there, with its luxurious fairways, deep sand traps, huge greens, scenic views of the Pacific Ocean, and I’ll never forget the wonderful smell of jasmine on the warm, late afternoons.

We would walked on the course, after the grounds keepers had gone home, and there wouldn't be a soul anywhere. We played as many holes as we could until either it got dark or we got tired. We played in our shorts, barefooted, and carried the few clubs we each had, in our hands. I’ll never forget those afternoons at that magnificent course.

After a few years the county club was finally completed and private. I tried golfing at public courses a few times after that, but it never was the same.
Last edited: Apr 9, 2021

I don't watch it as much as I used to when I knew the names of who was playing but I do look in once in awhile. I can certainly appreciate the shot making but it's tough to get excited when I'm not cheering for anyone.
The thing that strikes me most, and the reason I still tune in somewhat, is that this event is just dripping in tradition and legacy. Other than the Kentucky Derby or perhaps the Indianapolis 500 I can't think of another sporting event that has such undisturbed traditions over the years.
O

Feelslikefar said:
I also will be watching from Lee Elder, Jack Nicklaus and Gary Player on the Tee box,
all the way when the Green Jacket is Worn.
Click to expand...

In my little green jacket-- The Archies