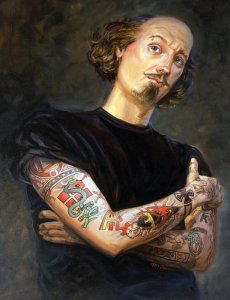 
FUN FACTS AND TRIVIA
There are so many not well known facts about Shakespeare and here are a few of them:

All Uranus' satelites are named after Shakespearean characters.

The words "assassination"and "bump" were invented by Shakespeare. If you say "laugh it off" you are also quoting shakespeare. Other inventions included 'puke' and 'bedroom'.

The most insulting insult that Shakespeare used was 'You Bulls Pizzle'

The Bard lost a play. The play Cardenio that has been credited to the Bard and which was performed in his life, has been completely lost to time. Today we have no written record of it’s story whatsoever.

The Great Bard suffered breech of copyright. In 1609, many of his sonnets were published without the bard’s permission.

Legend has it that at the tender age of eleven, William watched the pageantry associated with Queen Elizabeth’s visit to Kenilworth Castle near Stratford and later recreated this scene many times in his plays.

Unlike most famous artists of his time, the Bard did not die in poverty. When he died, his will contained several large holdings of land.

Suicide occurs an unlucky thirteen times in Shakespeare’s plays. It occurs in Romeo and Juliet where both Romeo and Juliet commit suicide, in Julius Caesar where both Cassius and Brutus die by consensual stabbing, as well as Brutus’ wife Portia, in Othello where Othello stabs himself, in Hamlet where Ophelia is said to have "drowned" in suspicious circumstances, in Macbeth when Lady Macbeth dies, and finally in Antony and Cleopatra where suicide occurs an astounding five times (Mark Antony, Cleopatra, Charmian, Iras and Eros).

William Shakespeare is one of the most identifiable icons of England. Others include members of England’s Royal family, Westminister Abbey, Big Ben, and red double-decker buses. His nickname was Billy Shakes.

"Comparing your relationship to Romeo and Juliet to express how in love you are is kind of like using Hamlet to demonstrate how close and well-adjusted your family life is." 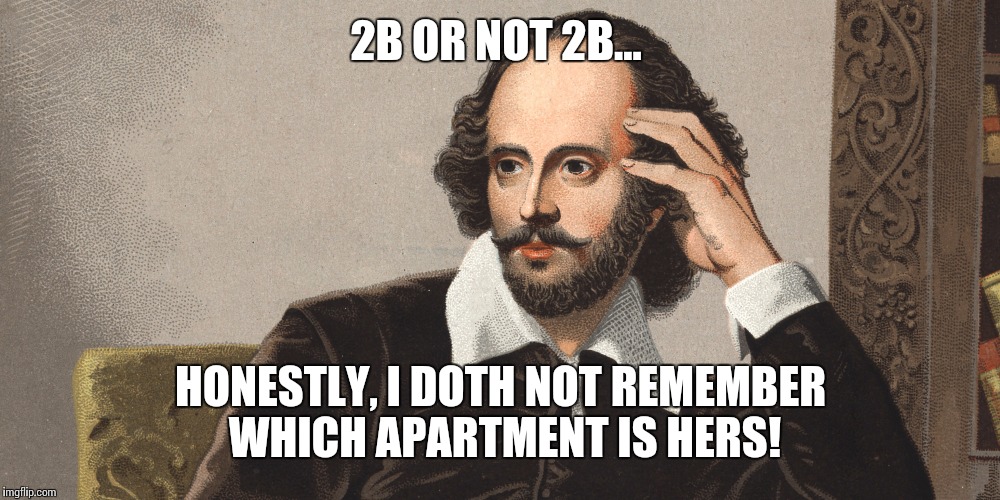 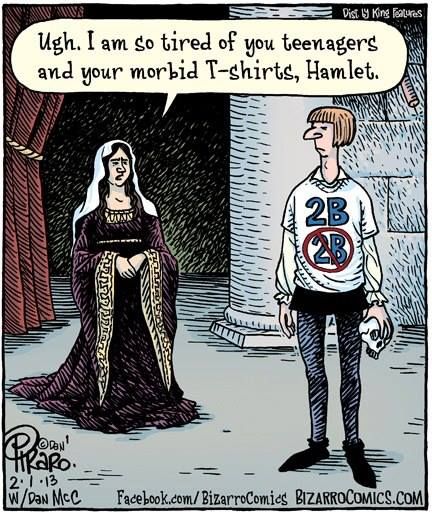 "Shakespeare boasted an uncanny understanding of human nature. Might the Bard be a helpful workplace consultant with tips on navigating the plot twists and characters taking stage in the modern world? (Want to learn whom you can trust at work? Take a meeting with Othello. Need advice on creative problem solving? Check in with Hamlet.) John Bolton walks us through five lessons from the Bard that still resonate today."

John Bolton: The power of imagination: Lessons from Shakespeare 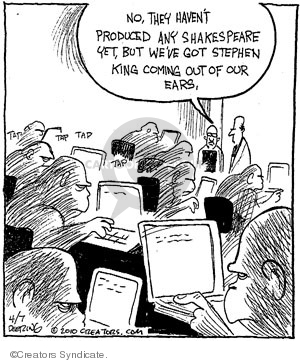 "Dr. Ralph Alan Cohen, Director of Mission at the American Shakespeare Center, shares some of his thoughts on the exciting interplay between modern playwrights and Shakespeare's works as part of ASC's Shakespeare's New Contemporaries project. "

Reminds me of a poster I created, once upon a time 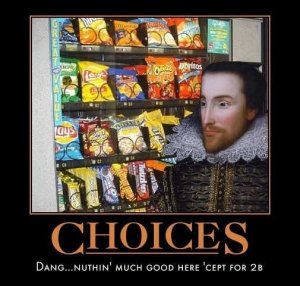 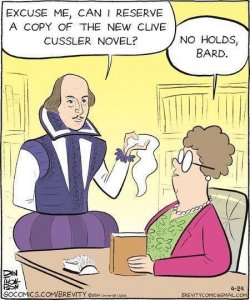 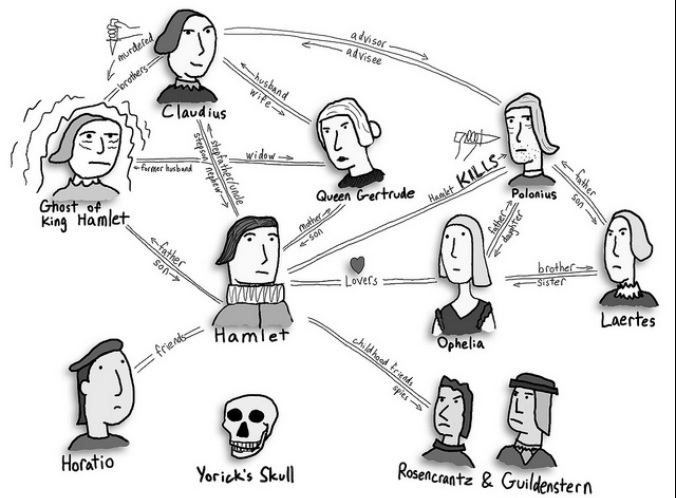 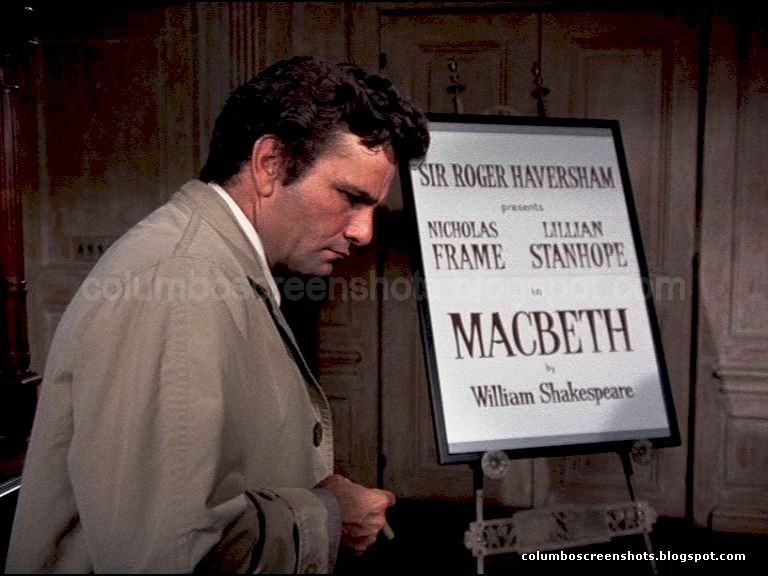 "Some time ago, a student mentioned an episode of Columbo that was heavily-indebted to Macbeth. I stored that knowledge away until I could track down the episode, investigate it, and contemplate its relation to Shakespeare. Only recently did I manage to do so." (Continue) 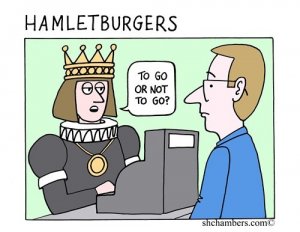 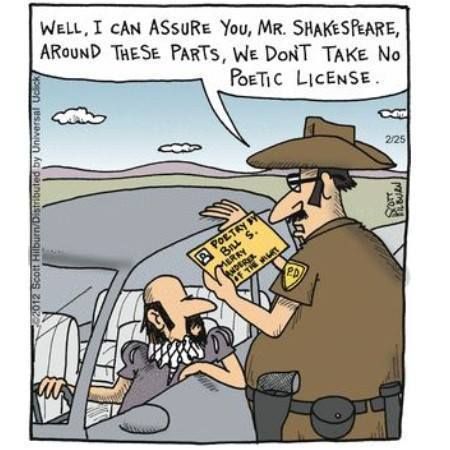 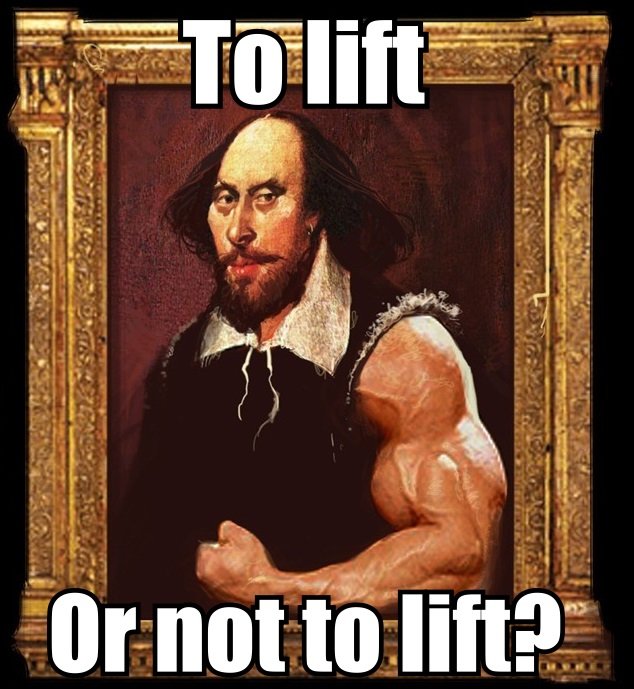 Marlene said:
And for a bit of Shakespearean fun, try this Shakespearean Insulter site to get an erudite insult each time you click the box:

How To Approach Shakespeare

Professor James Shapiro discusses how, for over two centuries, the works of Shakespeare have been a prism through which crucial American issues—revolution, slavery, war, social justice—were refracted, debated, and understood.

What did Shakespeare eat? 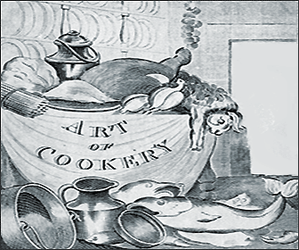 "One clue that we can speculate on what Shakespeare ate was the "accomplisht" cook, which was published in 1660. Other foods included "shrewsberry" cakes, which shortbread cookies, jellies and junkets (better known as gelatin or jellies), "sassages," gooseberry foyle, elderberry and blackberry pies. In the theater pit, walnuts, hazelnuts, plums, cherries, peaches, raisins, mussels, periwinkles and crabs were often eaten. "

The importance of Shakespeare - BBC Breakfast 5/7/2012