What do women really want?

grahamg said:
I'll give it a go, in ma best imtation aw midwest merican!
Ya thunk us dollards aint no clue as ti wots in wimins minds!
Ah reckin yous exaggeratin an dumb as a mule as with might be wi nows thas down reet ornerie soma da time.
(how did I do??)
Click to expand...

You've got to say haven't you......(remember this joke has little or nothing to do with me, and was found "elsewhere" being brought to my attention by someone colloquially known as "The shadow" famous adversary of Dick Barton, or Marvel comics villain maybe?): 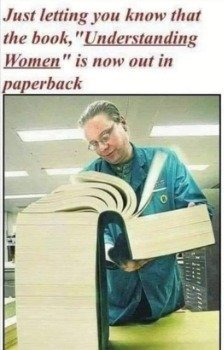 Just in case someone is offended by the above joke I heard this one slanted the other way last night on the radio:

Woman goes into police station and says, "Officer, my husband and dog have gone missing, reward offered for return of dog!".
R

I never gave it more than a second's thought. It is not my job to make them happy.

I keep myself happy, which makes me a more pleasant person. If that is not enough to make her want to be near me ? Well then the same door that let her in ... will let her out.

rgp said:
I never gave it more than a second's thought. It is not my job to make them happy.

I keep myself happy, which makes me a more pleasant person. If that is not enough to make her want to be near me ? Well then the same door that let her in ... will let her out.
Click to expand...

Some might argue it may sometimes be your job to make a partner happy, but at the same time your obvious strength of character does shine through, and this may well help a partner feel happy and secure, (my brother btw, whose marriage has lasted thirty years and counting, did tell his wife it was her job to make him happy, and in return he would be better to live with, so she'd get the happiness back in her own life).

I only know what I wanted...a man that would make me happy, be there for me during the bad times, supportive of me, a wicked sense of humor, a hard worker, of good moral character, a good father to our children, someone who liked some of the same things I did, and someone I would be grateful to have in my life. I found him. He’s my husband, best friend all rolled into one. 52 years later, not one regret

I have never been a “I am woman, hear me roar,” burn my bra type person. It’s probably my age, but I loved having someone taking care of me, and I’ve loved taking care of him. So I’m as perplexed as anyone else about what women really want these days.

I think I might have said in the OP that this thread was intended to be lighthearted and mostly it has been pretty much just that, with one or two instances where forum members took issue with something perhaps, indicating that there are more serious sides to the topic.

Without getting too heavy now I do want to give you one example, or at the very least one example of my own extreme foolishness, in being unable to realise what is really being said in the lyrics of a beautiful song by Nina Simone, entitled "You can have him".

I've listened to the song at least twenty times, its on one of my favourite albums and yet believe it or not I thought before today that it was a song about a woman glad to see the back of her man. I doubt one woman hearing the same song, or listening to the same lyrics was taken in as I freely admit I was, simple soul that I am/must be.

Here is the song for everyone to enjoy, and I'll post the lyrics separately later:

"YOU CAN HAVE HIM"

Here is a website where the meaning of the above song is explained for those of us who need it:

And some more details here about the writer of "You can have him"
https://shirleybassey.wordpress.com/2019/06/24/you-can-have-him-2/

Quote:
"This song is from the musical “Miss Liberty”. Premiere was Friday, July 15, 1949 at the Imperial Theater, New York. This song has been sung also by other artists like for example Ella Fitzgerald, Nina Simone and Doris Day.

Irving Berlin was born in Russia 1888. He was the most successful songwriter of the 20th century. Though he spent the better part of his career writing songs to be used in Broadway musicals (usually both words and music), he is better remembered for the songs themselves than for the shows (and sometimes films) in which they were introduced. He did not read music and could play the piano in only one key and only on the black notes – he used a special piano with a lever that changed keys for him and employed a musical secretary to notate his compositions. He had his first major success 1911 and wrote more than a thousand songs until he retired 1962 (died 1989). Berlin has been his own song publisher and built and owned a Broadway theatre, the “Music Box”, to house his shows. One of the most famous musicals he wrote is “Annie Get Your Gun” from 1946."

Shalimar said:
I, for one, object to being “handled” at all. It is a paternalistic term, and condescending.

Then I suggest that you stay off cruise ships. If it should hit something, and start sinking, it will be "women and children first". Of course you could always stay on board the ship and drown with the men.

senior chef said:
Then I suggest that you stay off cruise ships. If it should hit something, and start sinking, it will be "women and children first". Of course you could always stay on board the ship and drown with the men.
Click to expand...

Lest the man dresses up as a woman, (according to the film Titanic!), then again what might happen these days with "equality", and "Wokeness" being dominant culturally is an open question perhaps(?).