I always laughed my butt of at him going back to the Cid Caesar Show. He was also great on the Dick Van Dyke Show. His zany, sharp, biting style was like no other. RIP

I wanted to cry when I heard this news. I didn't, but I wanted to. Love Carl Reiner, a comic innovator & all around nice guy.

Agreed, @Pepper. One of the greats has left us.

Thot he already passed years ago....

Carl started his career as a regular on Sid Caesar's "Your Show of Shows''50-'54 also became one of the writers along with Neil Simon,Woody Allen,Mel Brooks.He &Mel would create the 2000 Year Old Man routine
He created classic sitcom'Dick Van Dyke Show '61-'66,starring Dick Van Dyke,Mary Tyler Moore.On the show he played'Alan Brady'. He won 5 Emmys for the show,also won Guest Actor Emmy in '95 on NBC sitcom'Mad About You'
Carl directed 15 movies,Steve Martin starred in 4 of them
The Jerk'79
Dead Men Don't Wear PLaid'82
The Man With Two Brains'83
All of Me'84
couple other movies he directed:
Oh God! '77 starring George Burns
Summer Rental'85
That Old Feeling '96

He also co starred in "Ocean's Eleven' 01,Ocean's Twelve'04,Ocean's Thirteen'07
He is survived by his actor/director son,Rob Reiner couple grandchildren
R.I.P thanks for the memories 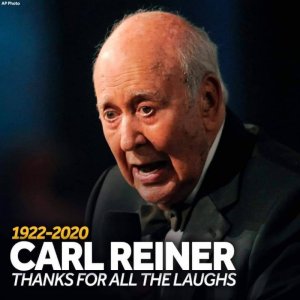 I forgot to mention to mention in my previous post,Rob's siblings,Lucas,Annie