Officials at Seaside Aquarium were alerted early Wednesday to a rare scene on the sands of the northern Oregon coast: A large, round, glistening opah weighing 100 pounds had stranded ashore.

The fish was 3 1/2-feet long - its huge body a mix of silvery and bright reddish-orange scales, dotted with white spots. Its large eyes feature hints of gold. Tiffany Boothe, assistant manager at the aquarium in the small beach community of Seaside, said it's the first opah fish she has seen on area beaches.

Boothe said it was not clear how this fish died, but she noted that it was in "great condition, meaning it was close to shore when it died."

The unusual-looking fish caused "quite the stir," the Seaside Aquarium posted on Facebook on the day of the recovery. Boothe said officials at the aquarium called as many people as they could to come see the fish, and they offered a glimpse to aquarium visitors, too.

Heidi Dewar, a research biologist with National Oceanic and Atmospheric Administration (NOAA) Fisheries, said that although strandings are unusual, this one is even more so. "I wouldn't expect an opah that size to normally be off Oregon," she said. 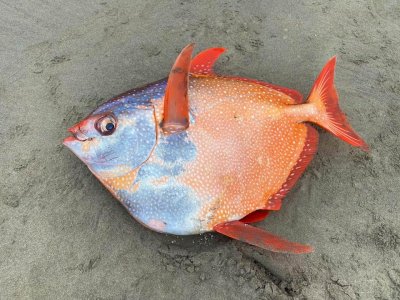 And happy looking....even in death.

Seriously, it is pretty. But that face. It's a fish that looks like a flirt. The pectoral and dorsal fins are interesting. I'm curious why they're like that. Wikipedia might know.

I have never seen anything like it, very pretty.

What a beauty, even in death.

Odd that it is dead and still maintaining color.

fmdog44 said:
Odd that it is dead and still maintaining color.
Click to expand...

Looks like a cartoon fish, doesn't it?
Hard to tell by that photo that it's half the size of a 200lb man.