Ever eat at a “Howard Johnson’s?”

In the American east in the 1950’s and 1960’s, Howard Johnson’s restaurants and motor lodges were a big deal, a “landmark for hungry Americans“ and a recognizable place if you were traveling on a family vacation. The restaurants had orange roofs, and featured a then-staggering 28 varieties of ice cream! The kid’s menus were nursery-rhyme themed, and you could order meals like a “Pieman” or “Simple Simon.”

Once boasting about a thousand outlets, Howard Johnson’s closed its last restaurant in 2017, taking another piece of my childhood with it… 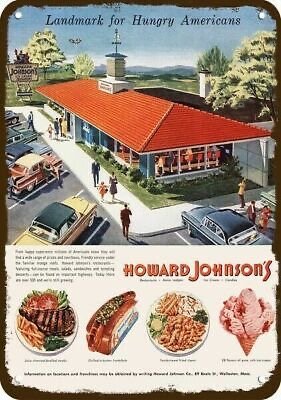 Location
East of the sun, West of the moon

Turquoise and orange, who could forget?
I

Did I ever eat at a HJ? NO! Whenever we had a road trip, my mom & dad would not stop at HJ-they were too expensive, besides we had a refrigerator full of food- 3 hours away.

Friday night all-you-can-eat clam strips at Howard Johnsons was a frequent outing for us in the 1970's. I have no idea why, because the clam strip were like breaded rubber bands, but it was "the thing to do".....

My late sister did a short stint as a night manager of a 24-hour Howard Johnsons Restaurant in the late 70's and, let me tell you, she had some tales to tell.

Yes. They had the best ice cream.

Yes, but never really liked them.

Just down the road we have a Howard Johnson's motel, they still seem to be in business. Cheapest motel in town, but still overpriced... a dump of the first order.

My folks favorite restaurant (Howard Johnson's) and we ate there many times when i was a kid (late 30's - mid 50's)
Another chain, here in New England, flying the same orange and blue colors was Dutchland Farms. I don't recall as many but they were very similar in appearance. For those not familiar with"Dutchland", I've posted some info below.

Dutchland Farms was a regional distributor of dairy products based in Brockton, Massachusetts which later expanded into restaurant franchising during the 1930s. Its restaurants were known for their distinctive orange and blue buildings with a trademark windmill atop the entrance. The company promoted the use of Grade "A" dairy milk in its ice cream, while comparable producers at the time still used Grade "B" milk.[2] It competed in the New England market alongside Howard Johnson's into the 1930s; some Dutchland stores were converted to Howard Johnson's units before being acquired as a whole company in 1940.[1]
Last edited: Nov 24, 2022

I never heard of Howard Johnson. Did he own restaurants across the U.S.?

When I was a little girl, my best friend's mom told us when she was little, in Massachusetts, she knew the real HJ. She said he had a hot dog stand in the street. I'm thinking Worcester but my memory may be off.

"Where did Howard Johnsons originate?

Howard Deering Johnson, the chain's founder, started his food empire in 1925 with an ice-cream shop outside Boston. He was an early pioneer of franchising. At one point in the 1960s, a new restaurant opened every nine days.Feb 16, 2017"
www.economist.com

Alligatorob said:
Just down the road we have a Howard Johnson's motel, they still seem to be in business.
Click to expand...

There's still one here too, way up North on East coast, but I think it's only the motel part (with a pool)...no more Ho-Jo restaurant.

Back when healthy eating & carb concerns were not part of my diet this was my go to for pigging out.
https://www.thefooddictator.com/howard-johnsons-fried-clams/

Kaila said:
There's still one here too, way up North on East coast, but I think it's only the motel part (with a pool)
Click to expand...

The one near us has a pool, but its been closed for repairs since 2016... Mostly catches tumble weeds.

Many times back in the 60's. We often stayed in a 7 story HoJo hotel in Isla Verde, Puerto Rico. It was bought out by Windham at some point.

Alligatorob said:
The one near us has a pool, but its been closed for repairs since 2016... Mostly catches tumble weeds.
Click to expand...

Yours must be an outdoor one then, or I hope so.
The one nearby here, the pool is indoors, and they actually still maintain it, and they hawk passes for the locals who drive by, to purchase to use the pool.
So says the sign out front of it, by the road; that same sign that decades ago, had tempted passers-by with messages of all the ice cream flavors, and other popular meals. 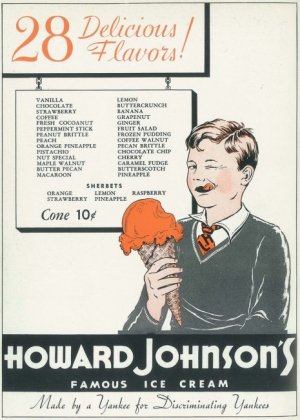 jujube said:
Friday night all-you-can-eat clam strips at Howard Johnsons was a frequent outing for us in the 1970's. I have no idea why, because the clam strip were like breaded rubber bands, but it was "the thing to do".....
Click to expand...

I had forgotten about the clam strips! You’re right it was a ‘thing’ and yes, they were like rubber bands.

MountainRa said:
I had forgotten about the clam strips!
Click to expand...

Excellent grease source as I recall.

Yes, in several different places. Old Forge, NY was a favorite when we took the kids to Enchanted Forest.

There was one at about the halfway point on a 4 hour drive to a regular summer vacation spot. So, a regular stop for a potty/snack break. And ice cream 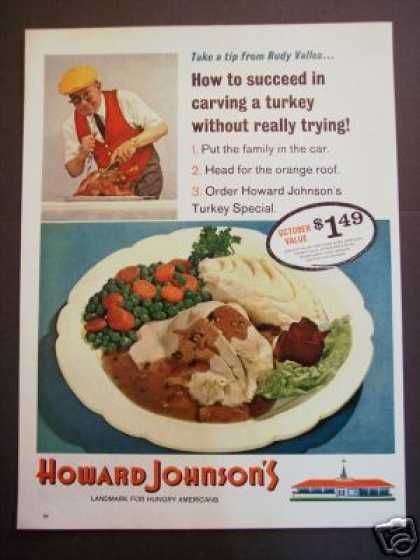 Seems like they were all over the place years ago.
Have been there while on trips around the country, but have no good or bad memories of them at all.

Yes. Many times in the 60s. My parents made fun of the "clam strips". We grew up on real Ipswich clams.
It was on the way to visit my sister at UMass