March 19th
3/19/84 CBS sitcom'Kate&Allie"
This show starred Susan St.James"Kate',Jane Curtin'Allie',as childhood friends both divorced with kids who decide to live together in a brownstone in Greenwich Village in NYC Kate's daughter'Emma'{Ari Meyers},Allie's 2 kids,daughter"Jennie'{Allison Smith},son "Chip'{Frederick Koehler} tried to get along. Kate was a free spirit,glamorous worked as a travel agent,struggled to be taken seriously in the work place.Allie was old fashioned,proper,who was a stay at home mom taking care of the domestic duties while persuing her college degree she abandoned after she married her husband
In the 5th season,Kate quit her job,she&Allie started their own catering service
The show was a mid season replacement,orginally with only 6 episodes,critics & viewers enjoyed it,became a hit for the network,ran for 5yrs Jane Curtin won 2 Best Actress Emmys for her role

March 24th
3/24/05,NBC sitcom'The Office' was adapted from BBC show of the same name created by comedian,Ricky Gervais
The show is about employees at Scranton,PA branch of fictious Dunder Mifflin Paper Company,Michael{Steve Carrell} is the clueless regional manager,who is devoted to his work thinks he's really funny,which annoys his co-workers.They are:
Dwight{Rainn Wilson} the assistant manager whose arrogance either annoys or amuses his office mates.Pam{Jenna Fischer} receptionist who puts up with the nonsense, JIm{John Krasinski} the tall,lanky sales rep who really likes Pam.They like to play practical jokes on Dwight
.Ryan{BJ Novak} young temp who quickly figures out about the office politics and plays along.
There was no laugh track,at times used improvised dialogue filled with long,awkward stares&pauses,characters would talked right into the camera documentary style.The critics liked the show from the start thought it was innovative,for some viewers it became an acquired taste.The show ended in 2013

We didn't have TV until I was almost in HS and the channels were few and sketchy. By HS, I was too busy working to watch much of anything except late night stuff. I remember Victory At Sea came on around 9 or 10 when I got off work. There was one show I liked during college years - Route 66 with George Maharis and Martin Milner. When the kids were growing up, we watched Monty Python, which we all thought was hilarious. Not much else sticks out, which is not much of an answer, but it's all I've got.

March 25th
3/25/2012 PBS show'Finding Your Roots' which is hosted by Dr. Henry Louis Gates, a professor of African-American research at Harvard University
This is a documentary show of ancestry of well known people.Each person is given a 'book of life' which has information researched by professional genealogists.It allows the person to learn more about their family 'tree' my discover secrets about their family they never knew before

March 26th
3/26/89 NBC's sci-fi show'Quantum Leap' Dr. Samuel Beckett{Scott Bakula} is a physicist who 'leaps' through space during a flawed experiment in time travel.He temporally takes the place of other people,correcting what he thinks are historical mistakes.
Al Calavicci{Dean Stockwell} plays Sam's holographic observer/friend who accompanies him on his journey.He uses a small super charged computer'Ziggy' to determine the odds&reasons for Sam's current situation
I watched this show every week,loved it,became a big fan of Scott Bakula.The show lasted until 1993

March 27th
3/27/83 ABC's mini series'The Thornbirds' which is based on the 1977 novel by Colleen McCullough
This 4 part 10hr show is about the Cleary family who move from New Zealand to Australia to run their aunt,Mary Carson's ranch,from 1920-1962 The main story is Meggie Cleary{Sydney Penny} who's love for the family's priest,Father Ralph{Richard Chamberlain} continues as she grows up.As an adult,Meggie{Rachel Ward} is frustrated she can't be with him. Ralph tries to convince himself that he loves God more than her.
This mini had an all star cast besides Chamberlain,Ward Barbara Stanwyck{Mary Carson}, Richard Kiley&Jean Simmons play Meggie's parents, Bryan Brown who plays the sheep herder Meggie marries{Brown&Ward are married in real life},Christopher PLummer who plays Ralph's mentor,Archbishop.
The show won 6 Emmys inc Barbara Stanwyck-lead actress in limited series, Richard Kiley,best supp actor,Jean Simmons best supp actress others were technical The music was composed by Henry Mancini Its the 2nd highest rated mini series behind # 1 'Roots'
I watched this mini series loved it,was faithful to the book

March 31st
3/31/92 NBC's long running news magazine "Dateline"
When this show debuted it was general news interest stories.The show's original co-hosts were Jane Pauley,Stone Phillips. It appeared a couple times a wk Other ex NBC hosts who appeared were Bryant Gumbel, Katie Couric.,Ann Curry
NBC Nightly News anchor,Lester Holt replaced Ann Curry as host in 2011
It now focuses on true crime stories.The 4 correspondents who have been with the show the longest are:
Dennis Murphy since'94
Josh Maniewicz since'95
Keith Morrison since'95
Andrea Canning joined the show in 2012
The show is on for 2 hrs every Fri from 9-11pm Sat from 9-10pm
I've watched the show on/off since the beginning,I usually tune in Fri nights

I don't know if these shows were mentioned before but my Dad loved "The Life of Riley" and even bought a tv to have in our kitchen in case the show aired at our dinner time. My dad loved it because the daughter in the show was named Barbara and called Babs and that's what my Dad called me. It aired from 1953 to 1958.
We also watched "I Love Lucy" it came on tv from 8 pm until 8:30, but our bedtime was 8:15 so I would have to stall to get to see the whole show, but my older sister would just run up to bed.It aired from 1951 to 1955. And of course, the Honeymooners which aired from 1955 to 1956.

April
4/2/78 CBS drama'Dallas' a prime time 'soap opera' which was a show about struggle for money,power,sex.The show centered on the wealthy oil family,the"Ewings' who lived in sprawling ranch in Texas.The patriarch John Ross Ewing{Jim Davis} his wife,'Miss Ellie{Barbara BelGeddes} and their 3 sons,JR{Larry Hagman},Gary{Ted Shackleford} Bobby{Patrick Duffy}.Gary who couldn't compete with his brothers{was rarely seen on show} left the family moved to Calif
JR the eldest, who viewers 'loved to hate was a power-hungry guy who would stop at nothing to get what he wanted .He was constantly unfaithful to his wife",SueEllen"{Linda Gray} Bobby was the opposite of JR married to wife"Pam" {Victoria Principal},her brother,"Cliff'{Ken Kercheval} was just as greedy as JR not as successful
One of the famous episodes during the show's run was 'Who Shot JR" it turned out to be Kristin{Mary Crosby} Sue Ellen's younger sister who was pregnant with JR's child.He survived and she was never prosecuted
Others in the cast were Charlene Tilton"Lucy"{Gary's daughter}Steve Kanaly'Ray Krebbs",manager of Southfork.Howard Keel'Clayton Farrow" was Ellie's 2nd husband,after Jock died
The show ended in 1991

April 15th
4/15/14 FX's Fargo' which was inspired by the '96 movie of same name written&directed by the Coen brothers.The TV show is created by Noah Fawley,each season has a different cast/location/time period.
In Season 1 is set in 2006 in Minnesota&N.Dakota,stars Billy Bob Thornton{Malvo} who is passing thru Minn,influences the community esp insurance salesman,Lester Nygaard{Martin Freeman} with his deception,violence.Two police officers,Gus{Colin Hanks} Deputy Molly{Allison Tolman} worked together on a series of murders that maybe connected to Malvo&Nygaard
I watched some of Season 1,thought it was good,the critics loved it

April 22nd
4/22/12 HBO's political comedy,'Veep' which stars Julia Louis-Dreyfuss as fictious U.S. Vice President,Selina Meyer,how she and her team deal with every day political events,try to leave a legacy
Others in cast are:
"Gary'{Tony Hale} Selina's personal aide,"Amy"{Anna Chlumsky},chief of staff,"Mike"{Matt Walsh},director of communications,"Sue"{Sufe Bradshaw},Selina's personal secretary
The show was a critical hit,won numerous TV Awards.Julia won 6 Best Actress Emmys for her role
I've never saw the show but heard it was funny

April 25th
4/25/78 ABC's detective series"Vega$' stars Robert Urich as private detective ,'Dan Tanna"show was filmed on location in Las Vegas.He drove around town in a vintage,red 1957 Thunderbird.He was on retainer to a wealthy,fast talking Vegas casino owner,'Phil Roth"{Tony Curtis}.The other cast members'Lt David Nelson{Greg Morris} who was Dan's contact at Las Vegas police dept,"Beatrice'{Phyliss Davis} his secretary,"Binzer'{Bart Braverman} who helped Dan with detective work.I watched this show thought it was different,it ended in 1981

One of my favorite shows was "The Man from U.N.C.L E." It was on from 1964 to 1968. I watched it every week with my oldest nephew who lived with us. He then moved to Georgia and started writing a book called "The Man from THUNDER." Of course we had different reasons for watching he enjoyed the plot of "The man from U.N.C.L.E and I loved,Robert Vaughn Davidand Mc Callum. 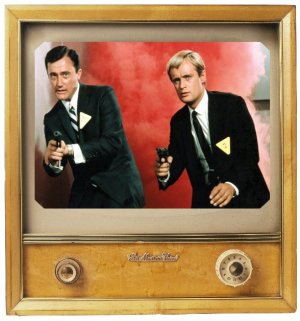 Sassycakes said:
One of my favorite shows was "The Man from U.N.C.L E." It was on from 1964 to 1968. I watched it every week with my oldest nephew who lived with us. He then moved to Georgia and started writing a book called "The Man from THUNDER." Of course we had different reasons for watching he enjoyed the plot of "The man from U.N.C.L.E and I loved,Robert Vaughn Davidand Mc Callum.

In one episode of NCIS one of the characters said ”What did Ducky (Dr. Mallard played by David McCallum) look like when he was younger?” Gibbs replied ”Illya Kuryakin.”
G

The world’s longest running TV series is Coronation Street affectionately called Corrie. It’s about the inhabitants of a street in a town in northern England. It currently airs 6 times a week.

This series premiered on believe it or not December 9th 1960

The character Ken Barlow played by William Roach appeared in the first episode and is still played by the same actor.

Got to give a mention for two BBC hospital dramas.Casualty which started in the eighties and is still going and it’s spinoff Holby City,set in a different part of the hospital which has also been on for quite a while now.
Both run for quite a chunk of the year these days.
There were two other spin offs-Holby Blue,a police series that didn’t last long and Casualty 1910(or something like that) set in the early 20th century.Also short lived.

Liberty,'China Beach' was strictly drama series unlike M*A*S*H which was considered a sitcom,over its 11yr run.At times it did do some dramatic episodes.I just liked Beach better

moviequeen1 said:
Liberty,'China Beach' was strictly drama series unlike M*A*S*H which was considered a sitcom,over its 11yr run.At times it did do some dramatic episodes.I just liked Beach better
Click to expand...

I found China Beach to be an insult. The last thing I need is a soap opera about the war.
G

We have a channel on our Swedish cable network that runs loads of old series: Murder She Wrote, Falcon Crest, The Flying Doctors, Diagnosis Murder, Jake and the Fatman, Cannon and so on and so on

April 29th
4/29/61 ABC's 'Wide World of Sports',sports anthology series shown on Saturday afternoons,5-7pm on East Coast,over the yrs time changed to 4-6pm.The original host was Jim McKay'61-'98 On the 1st show,featured track/field events featuring Univ of Penn,Drake Univ relays.
McKay's famous intro 'spanning the globe to bring you the constant variety of sport,the thrill of victory,the agony of defeat.The human drama of athletic competiton.this is ABC's Wide World of Sports' The show was cancelled in 1998 due to expansion of cable TV offering more sports outlets
I watched this show for yrs,liked Jim Mckay whatever sports event he was covering

This was a must watch when we got our first Black and White. I was probably 6 years old.