debodun said:
It is just I feel if I had Gus euthanized, I may be cheating him out of any good days he may have left.
I was talking about Gus to a few ladies before church today and one said she knew a woman that had a cat 23 years old!
I only had one other cat that made it to 19, a few made it to 18 and most I've had live to between 12 and 15. One exception was on that was 2, but he was hit by a car, so did not have a natural end.
Click to expand...

Just like us, animals are not all given similar life spans. It's not realistic to compare your cat's life span to another cat.

Well, deb DID ask, and we are answering, each in our way, out of concern for both.

I just wish if nothing really is going to be done for the poor cat, that she would have kept it to herself. Just the thought of what she's doing (or not doing) is just really mean to make us feel so bad about it. As most of us do. It's really not very kind.

SeaBreeze said:
Call it guilt tripping if you like, but many of the replies are just out of concern for the cat. Last mention of a visit to the vet was in May, and Deb has not said otherwise. In August she said he was crouching by his water bowl and not drinking or crying while drinking. Now it's already November and there's no mention of treatment or medication for this cat.

IMO, if it takes a little guilt to push Deb into action to relieve Gus of his misery through drugs or euthanasia, then that's great. If Gus could know, he'd be thankful too.

Deb will do as she will, that's her right. I will support her decision if it's medical treatment or euthanasia, but in no way, in good conscience, will I support anyone who allows an animal to suffer until death with no intervention. That's my opinion and feelings on the matter, it's very frustrating to hear of an animal suffering for months with no action taken on their behalf. A lot of us here, including myself are animal lovers and we truly care.


You don't have to euthanize Deb, but at least get him to the doctor for some medications that will help him through the daily pain.
Click to expand...

Absolutely agree and support this post 100%.
If someone needs a push to do the right thing that involves the suffering of an animal or human then I refuse to feel bad about being that push.

Olivia said:
I just wish if nothing really is going to be done for the poor cat, that she would have kept it to herself. Just the thought of what she's doing (or not doing) is just really mean to make us feel so bad about it. As most of us do. It's really not very kind.
Click to expand...

You know I was going to post something similar to this and then thought that maybe I was just being mean spirited. It appeared that once a lot of attention & concern was shown about the poor health of the cat, pictures then appeared and more info about his troublesome condition.

Why? Is it merely to torment us because we hate seeing something suffering. That in itself is disturbing.

"Keesha, post: 1163656, member: 5887"
Why? Is it merely to torment us because we hate seeing something suffering. That in itself is disturbing.
Click to expand...

Munchausen by proxy has crossed my mind. Not saying it is, though. And certainly not exactly. It's similar in the sense that one gets attention and sympathy that way. Really sad.
Last edited: Nov 3, 2019

I had Gus euthanized this morning. He hadn't eaten or consumed liquids in three days and was having trouble walking. This time I knew what had to be done. 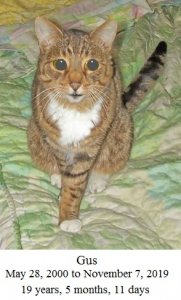 My condolences on the loss of your beloved Gus. I know you'll miss him terribly.

I am so sorry for your loss. We can only hope he is now walking,drinking and eating as he walks over the Rainbow Bridge and will be waiting for you on the other side. You were a good mom,no doubt about that.

The toughest thing was coming home to an empty house and seeing his water bowl and the blanket he laid on. He was the last living connection I had between my mother and the house. The house is now pet free - something it hasn't been in decades.
Last edited: Nov 7, 2019

debodun said:
I had Gus euthanized this morning. He hadn't eaten or consumed liquids in three days and was having trouble walking. This time I knew what had to be done.
Click to expand...

Sorry for your loss, but you did the right thing for him. I have had many pets and had to put them to sleep, and even though I KNEW I was doing the right thing I still felt like a murderer. If he had not eaten in three days and was having trouble walking, that would also be my message that it was time to do the right thing.

How sad for you, Deb. But, even though it may it may not seem so, you did the right thing by Gus. He is at the Rainbow Bridge heathy and running. He will be waiting for you there.
He was a nice looking cat. Like the colors.

(((deb)))
Been there, done that, know how great is your loss
Deepest condolences

Poem For Cats
And God asked the feline spirit Are you ready to come home? Oh, yes, quite so, replied the precious soul And, as a cat, you know I am most able To decide anything for myself.

Are you coming then? asked God. Soon, replied the whiskered angel But I must come slowly For my human friends are troubled For you see, they need me, quite certainly.

But don't they understand? asked God That you'll never leave them? That your souls are intertwined. For all eternity? That nothing is created or destroyed? It just is....forever and ever and ever.

Eventually they will understand, Replied the glorious cat For I will whisper into their hearts That I am always with them I just am....forever and ever and ever.
Author Unknown

debodun said:
I had Gus euthanized this morning. He hadn't eaten or consumed liquids in three days and was having trouble walking. This time I knew what had to be done.

Deb, I'm so glad to see you did the right thing for Gus. My heart goes out to you, I know how it feels to make that final decision for our furbabies. Hugs.

I did stay with him while the technician administered the injections, then they put him in a box and I took him to the county shelter where he will be cremated (they don't return ashes). Here he is a few years ago with his twin brother, Adam (right) who I had to have euthanized 3 years ago this January. He had abdominal lymphoma. 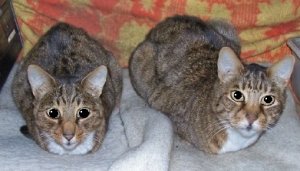 I'm glad to hear that you stayed with him up until the very end, I know it gave him comfort. I've always been there with my furkids until they have passed over, I never wanted them to feel alone with a stranger in that situation. Please take care, I know your home will seem empty now with both of your boys gone. You did the right thing for him, hard decision but he depended on you to make it.

My condolences on your precious Gus. I hope you will sometime consider adopting another cat, if
circumstances allow.

Beautiful picture of the two of them, Deb.

I've been thinking of the changes in your home and for you, now.

debodun said:
I had Gus euthanized this morning. He hadn't eaten or consumed liquids in three days and was having trouble walking. This time I knew what had to be done.

I'm so sorry Deb. Never is easy losing a loved one. You did all you could for him.

I was just thinking "I have to go and feed Gus". Funny how such long standing habits hang on.

My vet suggested that I scratch their head while being injected, because they like it and it distracts them from the needle. It's all so fast and gentle, it's like them just falling asleep suddenly. I just bury the cats in my backyard, when I had dogs I had them cremated because they were big and hard for me to dig a proper hole for them. Thanks for doing the right thing for Gus, I wish euthanasia were legal for us humans, too.

debodun said:
I was just thinking "I have to go and feed Gus". Funny how such long standing habits hang on.
Click to expand...

You are so right deb...3 years ago we lost 3 cats. We only had 3 cats - one old one at the office and one old one and one middle aged one at home. Both the old ones died and the younger one dropped dead in the prime of life with cardio myopathy. It took me 2 years to decide to get another cat.

Kept looking for the two indoor/outdoor cats every day for quite a while...watched for them at their favorite sitting and playing places. Thought about them when I usually called them to come in the house in the evening. They got along so well. One of them taught the other one to grab the screen doors with his claws and bang it so we knew they wanted to come in.

Now we have 2. Betting there's another cat in your future, too. Hang in there, gal!

I have worked with animal welfare so seen lots of behaviour when ill ' I have 4 cats at the moment all healthy thank god but
I do feel for you at the moment ' sounds to me like hes organs are shutting down [and he wants to drink but cannot ' have u spoken to your vet on he's outcome -if he is crying he must be hurting for sure ' so dont let the animal suffer anymore than it should ok'
my last cat that died of old age was 23 year old female -she was lovely brought so mush joy to our family - get your cat back to vets soon as possible see whats happening !!!!