What was the funniest bit you ever saw on a TV sitcom?

"Barney Miller" had some great episodes... the one where Wojo brings in brownies his girlfriend made... ended up HASH brownies.

FastTrax said:
You kinda beat me to this. I was preparing to post Taxi as one of my favorite TV shows and I have much company in the agreement that it was truly the funniest scene in Taxi ever.

Fast Trax: THANK YOU SO MUCH for posting that! THAT IS THE FUNNIEST EVER!!!!!!

Gaer said:
Fast Trax: THANK YOU SO MUCH for posting that! THAT IS THE FUNNIEST EVER!!!!!!
Click to expand...

You just made my day Gaer.

Welcome to the best senior site in town. There is no such thing as a wrong clip here. Every clip by any and every member is a gut buster, thanks for posting and have a good day.

Butterfly said:
YES! This is the one I was going to post, but you beat me to it. Undoubtedly the funniest thing I've ever seen on TV.

It doesn't seem as funny now, but at the time it was hilarious.
Click to expand...

"As God is my witness, I thought turkeys could fly" became a running phrase between my late husband and I. Whenever something happened that took us by surprise, one of us would say those words.


moviequeen1 said:
An episode on Mary Tyler Moore Show about the death of rarely seen character on the show "Chuckles the Clown."
At the memorial service,when the minister begins talking about Chuckles, Mary begins to giggle and tries to control herself without much luck.I thought it was funny
Click to expand...

I remember what I saw that the first time, I laughed so hard tears came to my eyes.

squatting dog said:
Had to be Carol Burnett doing Gone with the Wind and wearing a curtain.

My first thought was the Tim Conway/dentist sketch. I was literally on the floor, laughing. Also, the Carol Burnett GWTW sketch. Wasn't that
the longest laugh, ever recorded, on television? Third would be most of the Three & a Half Men shows. Excellent cast! I'm still watching most
of those. 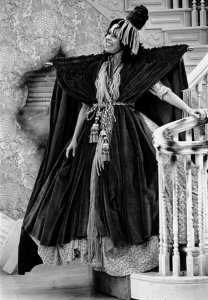 Lucille Ball stepping into a tub full of grapes with bare feet and pulling her garment up with that Yukky face she made. So funny!

One of my favorite shows

Mollymoo said:
My first thought was the Tim Conway/dentist sketch.
Click to expand...

Fawlty Towers..the Germans episode...freely available on you tube.
in which a concussed Basil manages to insult a group of German tourists terribly with war stuff.
‘ We didn’t start it!’
’Yes you did!You invaded Poland!’
Won’t post it here.Some may find it offensive!
from a different episode Ducks off!
and Radish Rose has posted the scene I was on about
Last edited: Sep 16, 2020

Gaer said:
There was an episode of 2 1/2 men whre Charlie and Alan were sick as dogs, getting ready for a double date, that was hilarious! The acting was supurb!
But, I think my all time favorite was:

hahaha! I was rolling on the floor!
WHAT WERE YOUR FAVORITES?
Click to expand...

That one is my very favorite too.

This wasn't a comedy bit. It was Julia Child's cooking show. She started off by telling us about a French dish- Fish. You know how she spoke French, when naming the dish. And this fish had to be tenderized., before it was cooked. From under the counter she grabbed a huge fish by the tail. She swung it over her shoulder and pile drove it into the counter. So she whips out this hammer and starts to wail away at the fish. We're not talking a little tappy tap. She's beating the hell out of this fish. She huffing and puffing, and swinging that hammer like there's no tomorrow. The fish is bouncing around as she's just whacking away at it. I fell on the floor laughing. I'm on the floor looking up at the TV, and she's still going at it with the fish. I was laughing so hard, I was crying. That is the funniest thing i ever saw on TV.

"As God is my witness, I though turkeys could fly."
Click to expand...

This is one of the ones I thought of first.

Pappy said:
That one is my very favorite too.
Click to expand...

Pappy, Were you talking about the 2 1/2 men skit? I wish I could find and show a copy of that one episode! That was the best one ever!

That 70s Show where they make a beer run to Canada still makes me laugh.