Of course. I was leaning towards one of those Jiffy pop things, you heat on stove, might have exploded.

I remember Orville sayin' "We'll have this ceiling up for you, in a jiffy"!nthego:

Things are coming along pretty good as you can see. Can’t wait to see it. 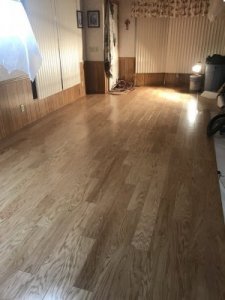 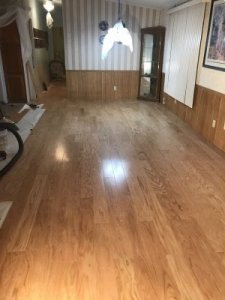 Ditto...If they ever get down to Texas, let me know!! 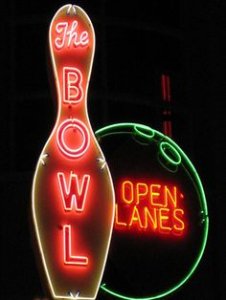 The wife, this isn’t her, says it ain’t happening Jim. 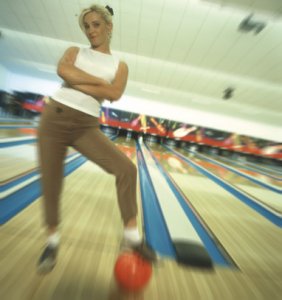 Well.the kids had to go back to upstate NY. The living room, kitchen and dining room are done. The bedrooms to be done at a later date. So darn proud of them for doing this for us. 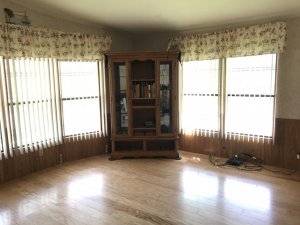 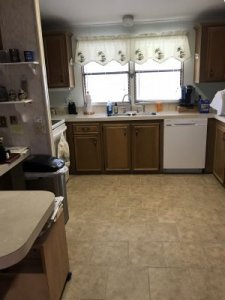 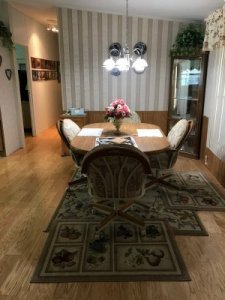 Haven’t posted awhile on my diary so I wanted to post a picture of my Dad doing what he loved best....fishing. He would get so excited when I visited him in Utica, NY to go fishing up in the Adirondacks. Dad was 100 when this was taken. He passed recently at 102. 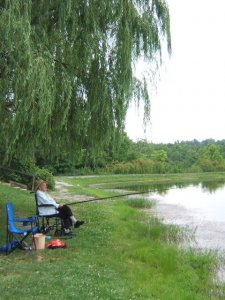 Sweet photo, Pappy. I wonder what he's thinking there.

We have been back in New York for 10 days now, and 8 of those days it has rained, with temperatures running very low for this time of year. Yesterday, it got up to 80 degrees and the camp grounds started to dry out a bit. Then, about 4 pm, all hell broke loose. Tornados warnings were blaring on our iPhones and iPads. Then it poured cats and dogs...I know this because I went outside and stepped in a poodle........back on subject, then came the high winds and we got out of our camper and went up to our clubhouse until it calmed down again. It was over in 1/2 hour so we went back to our trailer. No damage, but park is full of water again. A few photos I took on my walk this morning. 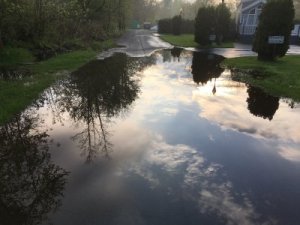 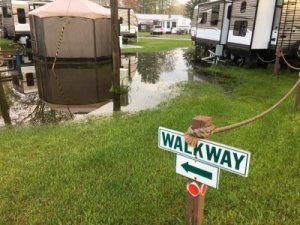 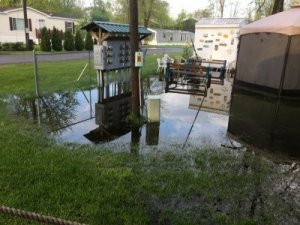 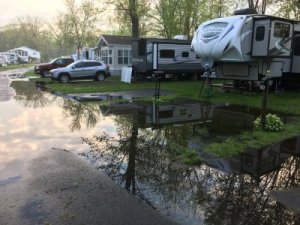 Weather' has been crazy in the northeast Pappy, CT too. Chilly and rainy.

Yesterday during your big storm, we got cloudy and suddenly, quite windy. Not bad, but almost enough to make me check the weather. It rained overnight. Again.

We're warming up now, high predicted to be 83!

Tuesday, December 25th, 1956 at 1:00 PM. My teenage bride and I are walking down the aisle at St. James Church in Norwich, NY. Rev Charters is our minister and the church is decorated with beautiful flowers from the Christmas service.

I Was home on a short leave, from the Army, and my girlfriend and I wanted to get married so that she could join me in Aberdeen, MD. Rev. Charters suggested that we marry Christmas. We thought it was a great idea as I only had two days left before reporting back to Fort Dix.

Needless to say, neither one of us had much money and had to take advantage of other people's kindness. The relatives gave us a reception at the Preston Grange Hall and most everyone stopped by to wish us well. Of course, there were a few folks counting the months to see if we had to get married and a few that said that we were to young and it wouldn't last. Sorry folks, on both counts.

As I write this, at 6:50 AM, I watching my bride on her I Pad and thinking 58 years ago we were just kids but as time went by, we grew into adults together. I won't lie and say it's been a smooth ride because there were a few rough years, but you know what ? I would do it all over again in a flash. Pappy

Where are all the men going?